*49% of the proceeds from our film, Vanishing Knowledge, will go towards helping these horses.

My name is Ejaz Khan, I am a Film Director and a fashion and wildlife photographer. My upcoming film, Vanishing Knowledge is about 300 lives possibly losing their home which means a good chance this Nokota breed will become extinct if they land in the hands of kill buyers.

Frank Kuntz, a well-known horseman, has been looking after these horses for a very long time. He was diagnosed with cancer after returning from the Vietnam War. He has dedicated his life to the survival of these precious Nokota horses. But at this time, the doctors aren’t giving Frank much time to live. The question is – how can Frank ensure the survival of this breed when his time is limited?

I met Frank and his horses when I traveled to North Dakota two and a half years ago for a photography project. After learning Frank’s story, his struggles with finances, and his health, I was compelled to share it with the world.

I thought if I do my job well-creating awareness about this subject, someone will come forward to help these lives. The process of making a documentary began. I was very unhappy with my own work after filming in North Dakota four times on four different occasions. I just could not bring life to this beautiful story. I decided to write a screenplay and turn it into a scripted feature film. The 5th attempt as a scripted film was a disaster as well. I was not feeling the emotions with my work that this story deserved. I was so disappointed in myself and my efforts in creating a film. Depressed and heartbroken, I put the project aside. I had sleepless nights thinking about the consequences these horses would face if I didn’t tell their story to the world.

After two months of struggling with my thoughts, I called my actors Frank, Paul, Christine, and the rest of the cast helping in our film, and begged them for another chance. These are not professional actors, actually, they have never seen a movie camera in their lives, they are farmers and ranchers in North Dakota/Pennsylvania. I asked them to do something they had never done before, get in front of the camera and become vulnerable. Because I thought they would play their roles best.
I took my wife out for dinner and asked her to blindly support me one more time, I told her, I wouldn’t come back to New York until I found gold. She smiled.

When I reached North Dakota, all of us met and discussed how we would remember dialogues, portray feelings in front of the camera without being camera conscious, count our steps and deliver dialogues at the precise moment and distance, etc everything a professional actor does to make it look real.

There have been instances when we have filmed countless takes over the period of days to make sure that we got the right moment. I have seen my characters cry after I have said “we have it.” They got emotional because our hearts were in the right place and all of us wanted the best for these 300 lives – and that is what mattered to all of us.

I have never had more pressures in my life. People have put their faith and trust in me to create something that will make a difference in our world. To make matters worse, the lack of budget I had to play multiple roles – Director, DP, Costume Designer, Art Director, etc. I could not afford to take a sound professional from New York so we hired a farmer’s assistant to hold the boom. 🙂 Spoiler alert- he nailed it.

After 8 months of editing, we locked our film. I won’t take up more of your time to tell you how music, foley, sound effects, and color have been created. Today, I am proud of all our efforts and I believe we have something very meaningful here. The immense support and response from our audience have been overwhelming, so far we’ve had close to two hundred thousand emails from people offering to spread the awareness of our film.

From the immense response and so much support from our 240,000 email subscribers, my wife and I have decided to donate 49% of the sale of our film for the care of Frank’s horses.

May I please ask you to share this letter as well as our trailer with your family and friends.
Enjoy our trailer below.
THANK YOU,️ 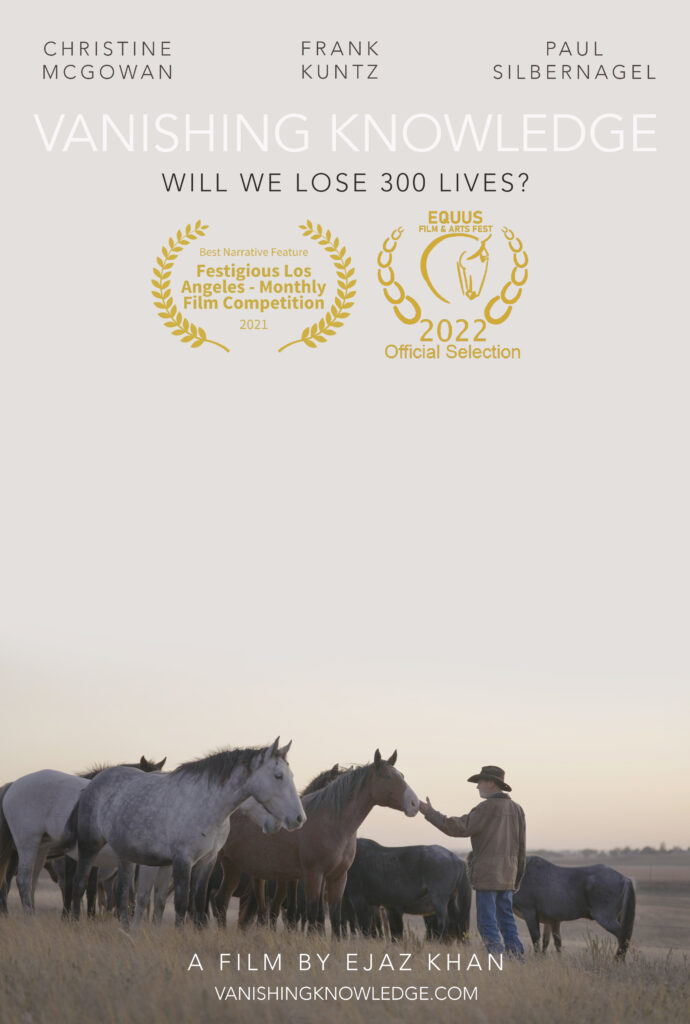 A film by Ejaz Khan. We welcome you to view his stunning horse pictures and fine art photography.