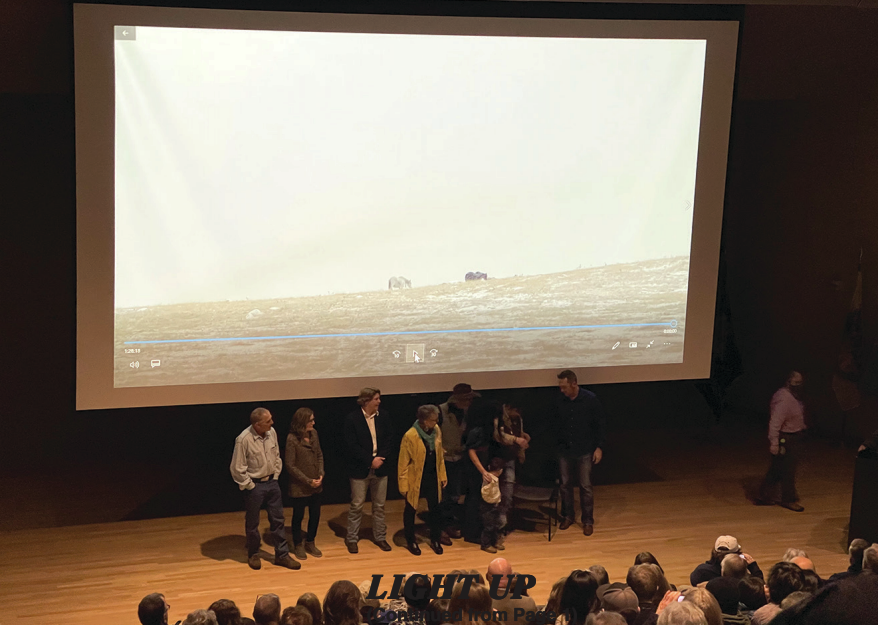 The cast of “Vanishing Knowledge” gathered on the stage of the auditorium at the North Dakota Heritage Center & State Museum in Bismarck on Saturday afternoon to answer questions from the audience. The actors played themselves and the script drew on their real lives. (Photos by Andrew Crowley).

Saturday’s premiere of “Vanishing Knowledge” at the North Dakota Heritage Center & State Museum in Bismarck was the culmination of a process that took the film’s director Ejaz Khan two years, multiple trips to and from Emmons County to complete. For the man at the center of the film, Frank Kuntz, it has been his life’s work protecting and advocating for the Nokota® horse.

The film, which began as a photography project, draws on the real lives of the actors to tell its story. The film tells about Kuntz, a Vietnam veteran afflicted with cancer and the monetary challenges he faces preserving a herd of 300 Nokota® horses. Kuntz worries about the future of the herd after he passes and he spends the course of the film trying to ensure the survival of the horses. The Nokota® horse is a rare breed of horse known for its intelligence, strength and gentleness. Part of the film depicts how the horses can be used in therapy for individuals on the autism spectrum.

“Vanishing Knowledge” received a standing ovation after its conclusion. So many attended the premiere that the Heritage Center’s Great Plains Theater was used to fit those without a seat. The film also screened on Friday night at St. Mary’s Central High School and on Sunday at the Heritage Center.

So many people were in attendance of the premiere that the Great Plains Theater was used to hold those who did not fit in the auditorium.

Before the film was screened, Khan acknowledged members of the cast who were in attendance. Erik Holland, Curator of Education for the State Historical Society of North Dakota spoke next.

“When we first started talking about this program, Ejaz was looking for teepees and people to set them up and now it seems like a decade ago, but it’s only been a few years,” Holland said.

Holland explained that normally these events were on Sundays but they made an exception for the film, which also screened the next day and was shown at St. Mary’s Central High School in Bismarck on Friday evening.

Before the film rolled, the director had one last thing to say to those in attendance.

“So if you love the film, come back tomorrow at 2 o’clock,” Khan said.

He thanked them for attending and then posed a question to the audience.

“What are you guys here for? What kind of film?” Khan said. “Are you here to watch a horse film?”

With prompting from Khan, the audience affirmed that they were there to watch a horse film.

“No, we changed it up on you guys, it’s not a horse film, it’s about showing up. Showing up in the things you believe in. Frank (Kuntz) shows up every single morning. He is with the horses, he’s there because he believes in them. He believes that they do good to him,” Khan said. “Paul (Silbernagel), same thing. He gets up in the morning, he’s at the farm, he shows up. He shows up because he believes in the cause. Christine (Carapico McGowan), you guys don’t know Christine, but you’ll watch her, she does exactly the same thing. I’m sure you guys show up, all of you, for the things you believe in. So this film is actu- ally about you, it’s about human resilience, it’s about you showing up. They believe that our world could be a better place and they show up. I’m sure you show up as well.”

The film received a standing ovation and the floor was opened up to questions from the audience as the film’s cast members stood on the stage. The film is expected to be available to view on Apple TV, Google Play and Amazon Prime later this year.

“Vanishing Knowledge” can be rented or purchased at vimeo.com/ondemand/vanishingknowledge and 49% of the proceeds from the film will go to the care of the horses.

For more information about the Nokota® Horse conservancy, visit nokotahorse.org.