*49% of the proceeds from our film, Vanishing Knowledge, will go towards helping these horses. 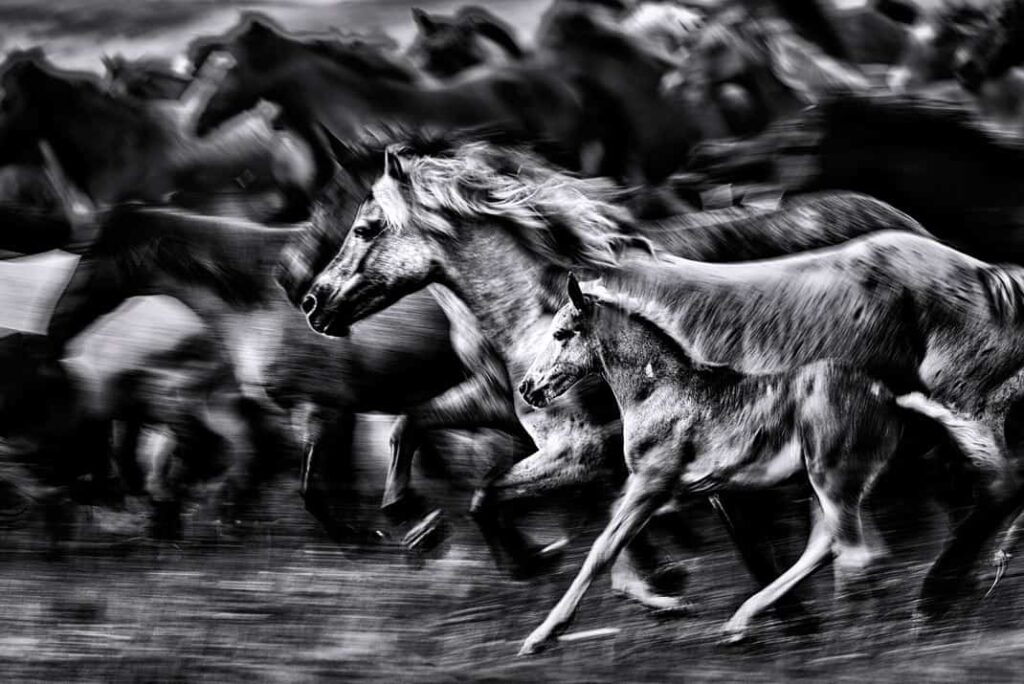 Picture of the Nokota Horse photographed by Ejaz Khan.

ABOUT THE NOKOTA HORSE

There are two general types of Nokota horses; the Traditional Nokota and Ranch-type Nokota, which comprise Nokota horses for sale.  A Traditional Nokota horse is usually smaller and more refined, closely resembling the Colonial Spanish horse and typically stand 14-15 hands high.  Many are reserved for breeding stock, used in endurance and western riding.  Endurance riding is a controlled long-distance race and is considered a competitive equestrian sport.  Western riding is a style of horse riding that has evolved throughout the years to meet the needs of the cowboy and American West.

The Ranch-type Nokota horse is larger and heavier than Traditional Nokotas.  Their stature closely resembles early Quarter horses and stands about 16 hands high or higher, which makes them perfect saddle horses.  Ranch-type Nokotas were also used for a variety of equestrian sports, such as dressage horses, fox hunters, show jumpers, and packing and trail horses.

The history of the Nokota horse cannot be accurately told without writing about Chief Sitting Bull, the Hunkpapa Lakota (Sioux) resistance leader, and Lakota people.  1876 would be the year known among the Lakota as “The Year We Lost Our Horses” because although victorious in the Battle of the Little Bighorn, they would soon lose their horses to the United States Army. The Lakota treasured their Nokota horses and bred them based on the qualities and characteristics they saw that aligned with what they believed would produce a good horse.  Lakota people, especially the Hunkpapa band, were known for their Nokota horses and Nokota horse breeds such as the blue roan war horses.  These warhorses (Nokota horses) were vital to the Native Americans and highly regarded for their strength when pitted against cavalry horses. 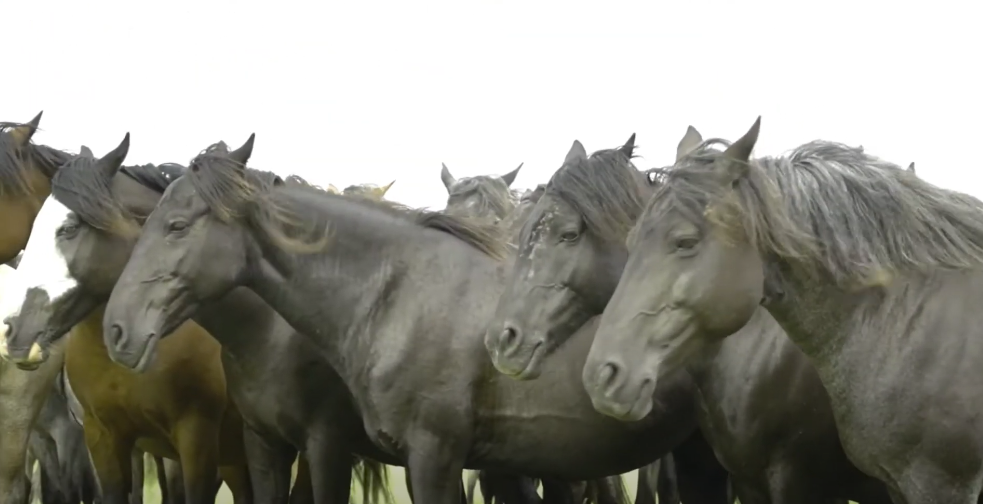 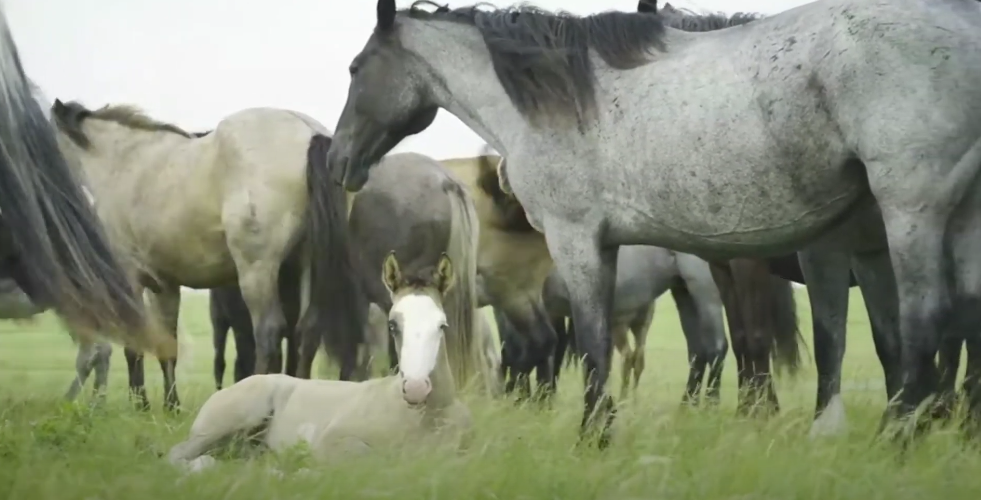 The Native American-bred war horses were originally confiscated from the Hunkpapa when Sitting Bull surrendered to the U.S. Army at Fort Buford in 1881 in exchange for amnesty for his people.   He would become a prisoner of war at Fort Randall in South Dakota for two years and later was permitted to live on Standing Rock Reservation between the North and South Dakota territory.

Marquise de Mores, a French aristocrat and pioneer rancher purchased 250 Lakota (Sioux) warhorses (Nokota horses for sale) from the Fort Buford post traders.  De Mores would then sell sixty of his Sioux mares to Arthur Clark “A. C.” Huidekoper, founder of HT Ranch in the late 19th century.  Those sixty Sioux mares would then be bred with Thoroughbred and Percheron stallions.

Huidekoper marketed the ponies as: “American horses,” saddle stock, racehorses, and polo ponies.  It wasn’t until decades later that their descendants (Nokota horses for sale) were discovered still in the Little Missouri badlands of North Dakota and in the hands of area ranchers.

During the early 20th century, the Nokota horses and the Nokota horse breed roamed the badlands freely but became targets of local ranchers seeking to limit grazing competition for their livestock.  Many of these equine breeds would be rounded up and either used as ranch horses, sold or slaughtered so as  to remove them from western North Dakota, and systemically kill off the feral horse herds.  During the construction of the Theodore Roosevelt National Park in the 1950s, a few bands of Nokotas and Nokota horses were inadvertently fenced in.  This resulted in the preservation of the Nokota horse breed, making them the last surviving population in North Dakota.

Although the fence at the Theodore Roosevelt National Park provided the Nokotas some measure of protection, the National Park Service (NPS) did not allow wild or feral horses on the grounds and were exempt from federal laws that were passed to protect wild and free-roaming equines in 1959 and 1971.  When the community learned that these wild horses were part of the historical scene (the open range days), they mobilized for local policy change in the 1970s.  The park, however, only allowed a limited number of Nokotas to stay and managed them as a “historical demonstration herd,” leading to periodic roundups, staged in order to limit the population, and culled horses (rejected horses) were sold at public auction as Nokota horses for sale.

It is said that because the feral Nokotas were constantly hunted, they were forced to hone in on their keen ability to adapt to the environment.  This not only proved their intelligence but overall made them a stronger and resilient breed.  These traits remain essential as to how they have been able to survive as seen in Vanishing Knowledge. 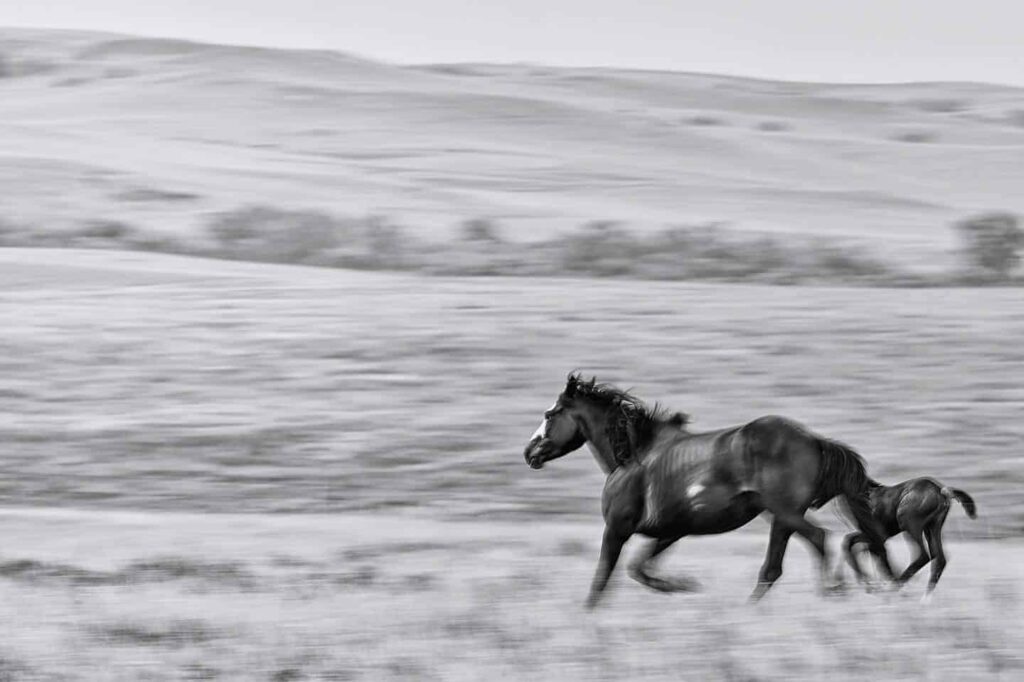 Distinguishable characteristics that are recognized in the Nokota horse are:

The Nokota horse exhibits the coat color characteristics of a colonial Spanish horse.  Many Nokotas are blue roan, a relatively rare color that has become a hallmark of the breed.  Other common colors for these ponies are black (the base color) and grey.  Some Nokotas have a gene that produces a frame overo or sabino with blue eyes, which is rare in Indian horse breeds. Typical overo patterns consist of one or a few irregular white body spots and bold white facial markings known as “medicine hat.” Sabino patterns usually have four white feet and legs. Typically the white extends up the legs in ragged patches and then onto the body from the belly of some lakota horses.

Other colors of the Nokota horse include red (strawberry ), bay, brown, and chestnut roan.  Few Nokota lines produce dun and grullo ponies.  A dun pony has a diluted coat color gene that affects both red and black pigments, which usually produces a pronounced stripe on their legs and withers. Grullo ponies are identified by their tan-grey or mouse-colored hairs, typically with dorsal stripes and black barring on the lower legs. Grullo’s can also be called blue, gray, or mouse dun. Some Nokotas change colors during the course of their lifetime.

The Nokota horse is described as athletic in build, agile, versatile, durable, sound, low maintenance, with great stamina, and permitting Nokota horses for sale for their uncommon jumping ability.  They have playful temperaments and are sociable, intelligent, obedient, cooperative, and kind.  Nokotas are observant and quick thinking, making them good at keeping themselves and riders out of harm’s way.  The Nokota horse is honest in its actions and communications, making them easy to train.

The Nokota horse possesses behavioral characteristics that make them an excellent host for therapeutic use.  They are a calming equine breed with the ability to absorb negative energy and match a human’s heart rate, bringing them to a relaxing state. Nokotas have been used to service those with mental disabilities because they can establish healthy boundaries through body language and equine feedback.

According to the (rights reserved) Nokota Horse Conservancy, during the 1980s Park administrators decided to change the appearance of the wild horses by introducing outside bloodlines and other Indian horse breeds. Dominant stallions in the Park were removed or killed and replaced witI other stallion breeds.  According to the NPS, the rationale for replacing the original horses was to improve their appearance and increase sale value during the auction.

Horsemen Leo and Frank Kuntz began purchasing as many of the original park horses as possible, in order to save them from slaughter.  Back in 1993, the (rights reserved) Nokota® horse was designated North Dakota’s “Honorary State Equine.”  Leo and Frank Kuntz formed a non-profit, the Nokota® Horse Conservancy in 1999, and its use as a way to preserve the Nokota horse. The organization has a breed registry known as the Nokota Horse Registry.

VIEW THE NOKOTA HORSE IN OUR UPCOMING MOVIE https://vanishingknowledge.com/

SIGN UP TO RECEIVE A FREE DIGITAL POSTER AND ALSO STAY UPDATED ON OUR MOVIE PREMIERE DATE!