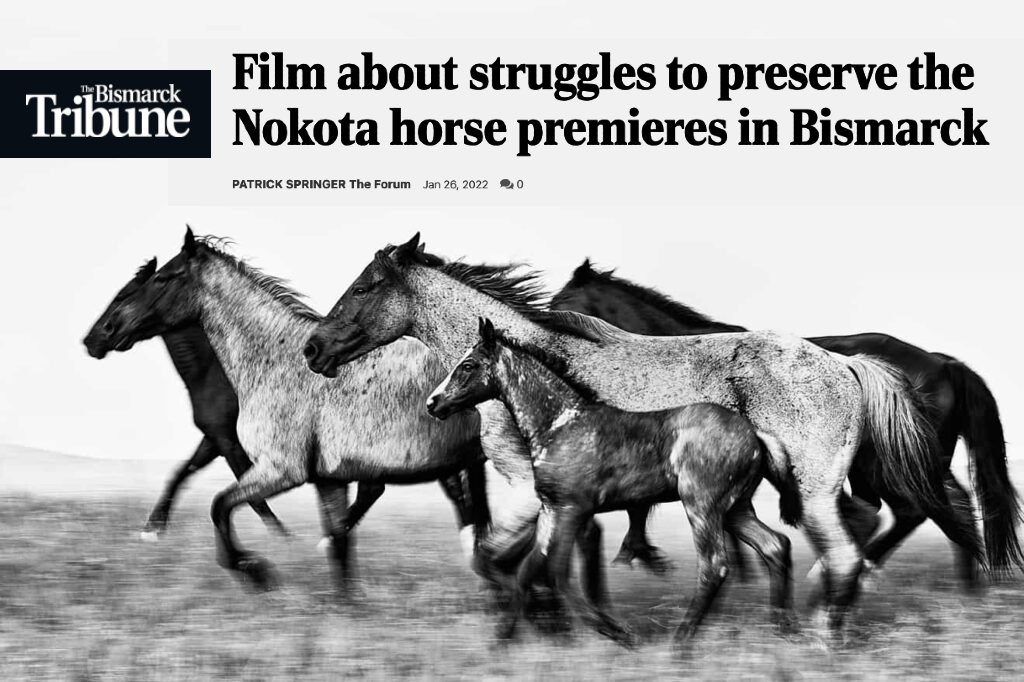 Ejaz Khan has made a feature film that he hopes will help save the Nokota horses in North Dakota.

The film “Vanishing Knowledge” evolved out of a fine art photography project featuring the horses.

Because most of the Nokotas are in a herd of about 300 owned by Frank Kuntz, a rancher near Linton, Khan got to know Kuntz — and learned the perils faced by the horses, who confront an uncertain future once the 70-year-old Kuntz is gone.

On his first day of shooting for the film, Khan asked Kuntz if he could be left alone with the horses on a remote 6,000-acre pasture. Alone with the horses, Khan let out an anguished shout, venting his frustration that his wife wasn’t able to make the trip on what was to be a unique celebration of her birthday.

Instead of backing away in alarm, as he’d expected, the horses came closer and formed a circle around him.

“They were kind of accepting me into the herd,” Khan said. “I sat down on a rock and they were all around me and looking at me. Why did they do that? I don’t know. But they knew I wasn’t doing well.”

That moment stayed with Khan, and helped to sustain a lengthy project that required countless trips from New York, where he lives and maintains his fashion photography studio, to the North Dakota prairie.

After two years of filming, “Vanishing Knowledge” is premiering in three showings in Bismarck on Jan. 28, 29 and 30. Admission is free, but Khan is hoping those who attend will tell their friends and family, so word of the film and its mission spreads.

The story is based on Kuntz’s struggles to maintain the herd. Kuntz is battling cancer that he traces to his exposure to the herbicide Agent Orange during army service in the Vietnam War, and deals with constant financial challenges.

Actors, including Kuntz, play themselves in the film, which can be rented for $9.99 or purchased for $19.99 on the Vimeo platform, with 49% of the proceeds going to support the horses.

Khan, Kuntz and others in the film will be on hand at the premiere showings at the North Dakota Heritage Center and St. Mary’s High School and will answer questions from the audience after each screening.

Kuntz hasn’t yet seen the movie. “I want to see it in a theater-type atmosphere for the first time,” with an audience, he said. “I’m not an actor. I’m nervous about how I’m going to come across, but I’m excited. I’m not sure I’m going to like seeing myself on a screen.”

Together with his late brother, Leo, Kuntz has been working since the early 1980s to save the Nokota horses, which stem from the wild horses in Theodore Roosevelt National Park. The nonprofit Nokota Horse Conservancy is also working to save the breed.

Kuntz is eager to see what comes of the awareness of the horses as a result of “Vanishing Knowledge.”

Will it help? “I know it’ll help the horses.”

When he started the film, Khan’s goal was that someone with the financial means to support the horses would be moved by the story to come to their aid. He’s still hoping that might happen, but he’s also hoping that many who see it will be motivated to do what they can.

“If that prince doesn’t show up, what can we do?” he said. “Either or would be good.”

So far, pre-orders for the film have come in from the United States as well as Germany, France, Norway, Canada and Spain. “Our marketing has reached all over,” Khan said. “We’ve done quite a bit of marketing.”

“Vanishing Knowledge” was chosen as the best narrative feature in the Los Angeles Monthly Film Competition and is a 2022 critical selection for the Equus Film & Arts Fest. Khan has tried without success to get the film streamed on Netflix and Hulu.

The film’s tagline is “A true story of human resilience,” which could apply to the film’s production as well.

“I don’t know how the film got made,” Khan said. “I can’t believe the movie’s done. I enjoyed the project.”

In fact, Khan already is gearing up to make another movie in North Dakota. “Trapped” will be about sexual trafficking, a story inspired by a conversation Khan had with a girl in North Dakota.

He plans to shoot the movie in six weeks in December 2022 and January 2023, a period to take advantage of North Dakota’s snowy winter landscapes.

This film will use professional actors, but Khan plans to cast Kuntz in a role.

A screening of “Vanishing Knowledge” will be at 6 p.m. Friday at St. Mary’s Central High School, 5802 Ridgeland Drive in Bismarck.

To reserve a seat at the Heritage Center, with screenings at 2 p.m. Saturday, Jan. 29, and 2 p.m. Sunday, Jan. 30, go to https://vanishingknowledge.com/premiere-event/. The Heritage Center is at 612 E. Boulevard Ave., on the state Capitol grounds.